Lucara's 1,109-Carat Rough Diamond May Be Too Big to Sell; Will Mining Company Carve It Up?

When the 1,109-carat Lesedi La Rona failed to meet its reserve price at Sotheby's London in June of 2016, the disappointing result was the first signal that the massive diamond was just too big to sell. The final bid of $61 million fell short of the $70 million reserve price. 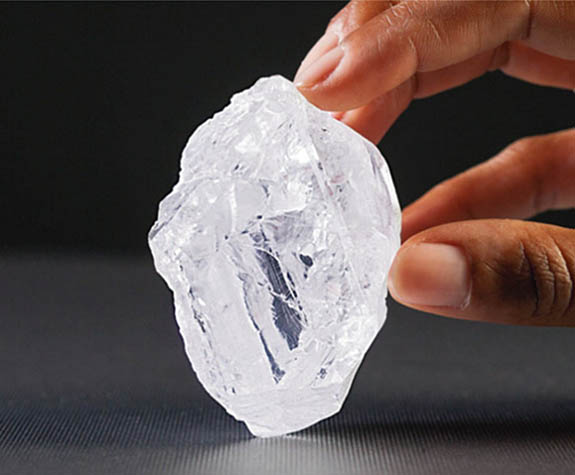 Now, 13 months later, diamond-industry insiders are buzzing about the likelihood that Canada-based Lucara Diamond Corp., which mined the stone in Botswana, will have to carve up the world's largest rough diamond in order to attain its maximum value.

Originally, Lucara and its chief executive William Lamb were hoping that Lesedi La Rona's buyer would forgo the opportunity to process the large rough into many smaller diamonds — and leave it in its natural state. Instead of working with members of the upper echelon of the diamond trade, Lamb decided to put the huge diamond on the international stage at Sotheby's. He was confident a deep-pocketed collector would appreciate the historical significance of the gem and essentially leave it alone.

"It's only the second stone recovered in the history of humanity over 1,000 carats," he told Reuters. "Why would you want to polish it? The stone in the rough form contains untold potential. As soon as you polish it into one solution, everything else is gone."

Cutting a rough diamond of this size is uncharted territory for the few elite diamond firms that have the finances and skill set to make a deal with Lucara. While an 1,109-carat rough diamond could yield the world's largest polished diamond — the current record is held by the 530.20-carat Great Star of Africa — the cutting process is fraught with risks and there are no guarantees.

"When is a diamond too big? I think we have found that when you go above 1,000 carats, it is too big — certainly from the aspect of analyzing the stones with the technology available," Panmure Gordon mining analyst Kieron Hodgson told Reuters.

Breaking the Lesedi La Rona into smaller, less risky parcels might generate more buyer interest. We already know that Lucara successfully sold the 813-carat "Constellation" to a Dubai trading company for a record $63 million, and Laurence Graff purchased the 374-carat broken shard from Lesedi La Rona for $17.5 million. All three diamonds were mined within three days of each other in 2015.

Holding onto the diamond for too long may have a negative effect on Lucara's potential payday. New technology employed by the world's largest diamond mining companies has resulted in the recovery of many more 100-carat-plus stones. Previously, the sorting machines would fracture the largest crystals instead of identifying and preserving them.

It may be only a matter of time before the next 1,000-carat diamond is revealed to the world. If and when that happens, the novelty connected to Lesedi La Rona's extraordinary size may be lost, along with some of its value.