Survey: 49% of American Brides-to-Be Want Their Engagement Rings to Be a Surprise

When it comes to getting engaged, nearly half of American brides-to-be want their engagement rings to be a surprise. That was the key finding in Ebates' national Wedding Survey. 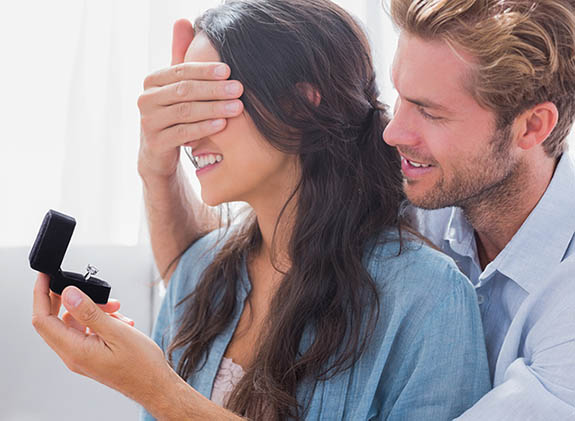 The concept of whether the selection of a "forever accessory" should be left strictly within the purview of the future groom has been debated for generations. While everyone can agree it's commendable that he wants to take the initiative to pick the ring, others may argue whether he's really best equipped to make that decision. Should she get involved by dropping a hint or two? Or, since she'll be wearing the engagement ring for the rest of her life, might the future bride prefer to pick it for herself?

Ebates, a company that rewards members with cash back when they shop online, learned that 49% of respondents want the ring to surprise them, while 28% would prefer to go shopping with their partner and provide feedback and 15% admit that they'd like to pick out a ring for themselves.

Of the group that wants to be surprised, 85% reported they would say "yes" even if they hated the ring their partner used to propose.

The idea of settling for a "hated" ring may be tied to still another interesting finding, where 72% said it’s acceptable to upgrade to a better ring later in the marriage.

Respondents weren't put off by the idea of wearing a previously owned "dream ring." Exactly 42% said they would happily wear one, even if the ring tied to the previous relationship ended in divorce.

Nearly half of those surveyed said they would expect to spend between $1,000 and $5,000 on an engagement ring. The Knot’s 10th annual Real Weddings Study reported back in February that the amount spent on a engagement ring in 2016 was $6,163.

The Ebates Wedding Survey also revealed that the most popular wedding gift was money (56%), following by a gift card (46%), kitchen supplies (34%), home furnishings (27%), appliances (22%) and an experience or trip (21%). Nearly one in five (19%) admitted that they were OK with re-gifting something as a wedding gift.

The national survey reflects the opinions of 1,008 adults and was conducted online by Propeller Insights.