Adorned with three million Swarovski crystals, the 900-pound star atop the 77-foot-tall Norway spruce at New York’s Rockefeller Center will come to life tonight during the tree-lighting ceremony that will be broadcast on NBC. 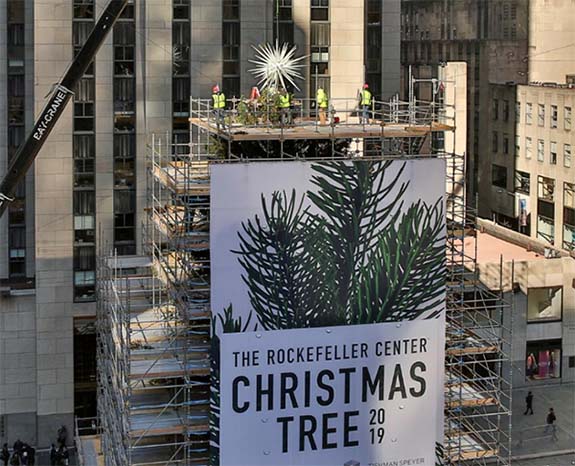 The mammoth star, which has a diameter of 9 feet 4 inches, was lifted to the top of the tree by crane operators on November 13, just three days after the tree arrived from Orange County, N.Y. Each of the 70 rays of the Swarovski Star is designed to glow from within, with the light refracted by the crystal surface, creating a sparkling effect.

The tree was a donated by Carol Schultz, who said it originally lived in a pot on her coffee table before it was big enough to be planted in her garden in 1959.

Holiday season 2019 marks the second time the current star has ascended to the top of the Rockefeller Center tree. The new star made its debut exactly one year ago, replacing a Swarovski Star that had been in service since 2004. That star weighed 550 pounds and was studded with 25,000 crystals, barely 8% of the tally of the current star.

The new star was designed by renowned architect Daniel Libeskind, who created the master plan for the reconstruction of New York’s World Trade Center site. Libeskind said that his Swarovski Star is inspired by the beauty of starlight — something that radiates meaning and mystery into the world.

“The Star is a symbol that represents our greatest ambitions for hope, unity and peace,” he said in 2018. “I am tremendously honored to collaborate with Swarovski on the Star, and with the entire design team, to bring cutting-edge innovation and design to crystal technology.” 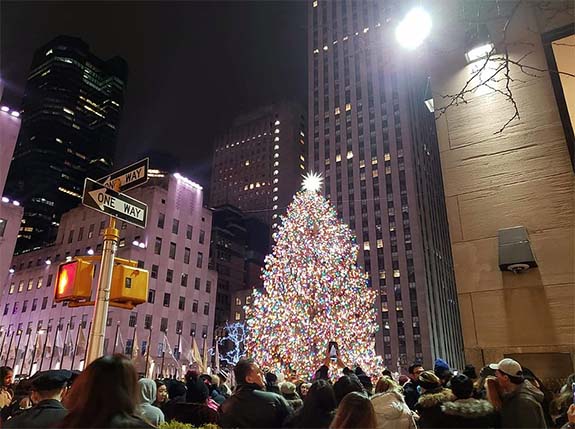 The tree will remain lit and on display on the plaza between West 48th and 51st Streets and Fifth and Sixth Avenues through Friday, January 17, 2020. More than half a million people will pass by the tree every day, making Rockefeller Center the epicenter of New York City’s holiday celebrations.

Rockefeller Center officially began its tree-lighting tradition in 1933, when a Christmas tree was erected in front of the then-RCA Building and covered with 700 lights. The lighting ceremony has been broadcast live since 1951.