Music Friday: Sting of The Police Sings of Rings in 1983’s ‘Wrapped Around Your Finger’

Welcome to Music Friday when we bring you great throwback songs with jewelry, gemstones or precious metals in the title or lyrics. Today, Sting of The Police turns the tables on a controlling lover in “Wrapped Around Your Finger,” the beautiful and timeless hit from the chart-topping 1983 album, Synchronicity. 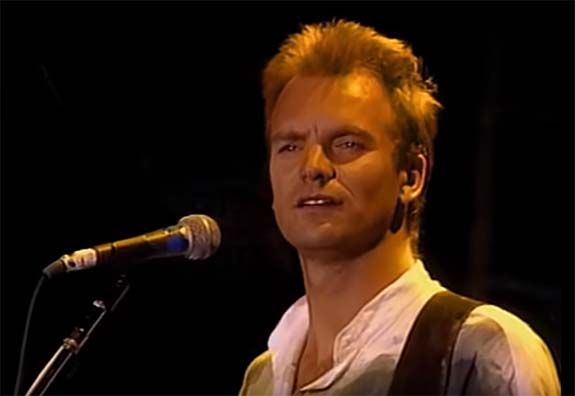 Sting uses jewelry imagery and literary references to describe a young man who finds himself in a dangerous dance with the devil, describing his perilous situation as being caught between Scylla and Charibdes.

As characters from Greek mythology, both Scylla and Charibdes were beautiful maidens who were turned into horrific monsters. Scylla guarded the Straits of Messina and destroyed any boats that passed by. Across the strait was Charibdes, who was blamed for whipping up deadly whirlpools. Sailors trying to row through the narrow channel had to face their wrath.

Throughout the song, Sting returns to idea of being controlled, or being wrapped around one’s finger. It’s a theme supported by his lyrical references to a ring and a band of gold.

In the first verse, he sings, “Hypnotized by you if I should linger / Staring at the ring around your finger.”

In the second verse, he continues, “I can see the destiny you sold turned into a shining band of gold.”

In various interviews, Sting confessed that “Wrapped Around Your Finger” is based on his own experiences.

The 68-year-old singer/songwriter/musician explained in Lyrics By Sting that, “this song is vaguely alchemical and probably about a friend of mine, a professional psychic and my tutor in tarot, with bits of Doctor Faustus and The Sorcerer’s Apprentice thrown into the pot for good measure.”

“Wrapped Around Your Finger” was the fourth U.S. single released from Synchronicity, an album that topped the U.S. Billboard 200 chart and sold more than eight million copies. “Wrapped Around Your Finger” ascended to #8 of the U.S. Billboard Hot 100 chart. At the 1984 Grammy Awards, Synchronicity was nominated for five awards — including Album of the Year — and won three.

Born Gordon Matthew Thomas Sumner in Wallsend, Northumberland, England, in 1951, Sting was the principal songwriter, lead singer and bassist for The Police from 1977 to 1984 and launched his solo career in 1985. He is credited with being one of the world’s best-selling music artists, having sold more than 100 million records as a member of The Police and as a solo artist.

Please check out the video of Sting and The Police performing “Wrapped Around Your Finger.” The lyrics are below if you’d like to sing along…

“Wrapped Around Your Finger”
Written by Sting. Performed by The Police.

You consider me the young apprentice
Caught between the Scylla and Charibdes
Hypnotized by you if I should linger
Staring at the ring around your finger.

I have only come here seeking knowledge,
Things they would not teach me of in college.
I can see the destiny you sold turned into a shining band of gold.

Devil and the deep blue sea behind me,
Vanish in the air you’ll never find me.
I will turn your face to alabaster,
When you’ll find your servant is your master.